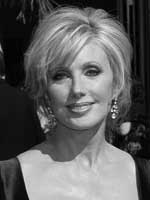 Morgan Fairchild's mother enrolled her in acting lessons when Morgan was too shy to give a book report.

She appeared in the following 13 episodes of Radio Mystery Theater

Its such a pleasure to be able to Appreciate Morgan for her Amazingly sensual Voice&Mind As Opposed to being HypmoT(eYe)Zed by her incredible stunning Beauty.Thank-YOU for the Link

Reply
I wa always madly in like with Morgan Fairchild in the 1970s & 1980's. now, replaying episodes of CBSRMT, looking to relive memories, I've rediscovered her through her sultry voice. She's great to fall asleep to.

Reply
Hi Everybody, Like many of you, I am old enough to remember when these shows aired for the very first time. I taped them. I played them over and over, until the tapes broke. The series was canceled. I went into hysterics. I even wrote to CBS in New York. A lady named Marjorie Holyoak wrote back to me and explained that there were no shows available from the producers. I was devastated. OK, fast forward 30 something years later, and here we all are. I have a question: does anyone have any idea of what the studio looked like? I know this is hardly something that would take priority, but when the sound effects of the howling winds were played, I felt like I were there. When the car broke down on highways, I could feel the despair. It was nothing more than a studio in New York. Does anybody have a picture of what the studio looked like? I have seen the picture of Teri Keane, Tony Roberts, Lois Nettleton, and Norman Rose standing at the mikes, but not another one. Has anyone heard anything from someone who was involved? Can anyone help? This is very sad. In September, I called the talent agency that represented Marian Seldes. I spoke to a woman and told her I was interested in writing to Ms Seldes to ask questions in general about the studio. The woman was so polite and friendly, She told me that since I was not requesting photos, manila envelopes would not be needed, etc. She told me she would surely forward the letter. I wrote on the first of October. I was going to start the month off positively. Unfortunately, I waited until the 8th, to the mail her letter. She passed 2 days before. I lost out. On October 8, I sent Morgan Fairchild an E mail and a letter to Amanda Plummer: no response. On various dates, I sent multiple E mails to Jada Rowland: no response. On October 21, I sent letters to Glynnis O' Connor, Teri Keane, and Bob Kaliban. Ms Keane's letter was sent back, "Return To Sender." No response from the others. On November 8, I sent Keir Dullea a letter: no response. On November 17, I joined FaceBook. On November 19, I sent Kristoffer Tabori a FaceBook message: no response. On November 20, I sent Don Scardino and Jada Rowland a FaceBook message: no response. On November 21, I sent Facebook messages to Amanda Plummer and Glynnis O' Connor: no response. On November 23, I sent a FaceBook message to a woman named Melina Brown asking if she is Himan Brown's granddaughter. I am keeping a log in the hopes that someone will share their experiences with me. I would love to know anything; even the color of the carpet. Anything would be a great courtesy.

Reply
Thank you Robert for your diligence. Your contact list is helpful and I'm baffled as to why no one responded. I've long wanted to get more information on RMT but have not had the time and energy to devote. Maybe your quixotic venture will inspire some of us to come up with some new angles of approach. Intriguing idea to see more of the CBSRMT studios. Have you tried contacting CBS radio and asking about their historical archive if any? They may send you to the Museum of Broadcasting which also may have stuff. Good luck on your quest.

Reply
She visited a taping in the winter of 1975. EG Marshall recorded his intros separately and was not at the session. Hy Brown sat behind the glass with the recording engineer. it was still the days of reel to reel tape and a pair of Ampexs were rolling at all times.. The studio was big enough to hold a table and chairs where the cast did the read through. To the left of the control room was more glass and a very small room where sponsors / guests could watch the tapings. Behind the boom (and out of the picture Michael shared) was Al Schaffer's amazing sound effects kit, which he very kindly demonstrated for us. I saw the production of "The Rise and Fall of The Fourth Reich", an amazing story written by Henry Slesar. The cast were total pros. Bob Dryden played Hitler. There were flubs. Hy and the cast laughed a lot and then got back to business. We took Paul Hecht out for coffee afterward.

Reply
As a child I used to sneak my radio in to listen to these beyond bedtime and then one night passing my mom watching tv shows from Quin Martin (think it was Barnaby Jones) I heard them say that next week it would star Morgan Fairchild and not realizing because they were voices on the radio so I wasn't aware I asked if I could stay up that next week to watch the show so I could see that guy Morgan from the mystery theater. Not only was it a big surprise to find Morgan was a girl but so pretty a lady I think I had my first real crush. Thanks for housing all these great shows so I can hear again the episodes that first caught my ear as one raised on the radio.

Reply
Morgan Fairchild (born Patsy Ann McClenny; February 3, 1950) is an American actress. She achieved prominence during the late 1970s and early 1980s with continuing roles in several television series, in which she usually conveyed a glamorous image. Fairchild's first acting job was as a double for Faye Dunaway during filming for the film Bonnie and Clyde (1967), particularly in scenes where Bonnie is supposed to be driving a car, because Dunaway couldn’t drive a stick shift. She took her new first name, Morgan, from the David Warner film Morgan - A Suitable Case for Treatment (1966). Fairchild then moved to New York City, where she secured her first credited onscreen role as the maniacal Jennifer Pace in the daytime soap opera Search for Tomorrow from 1973 until 1977. From the mid-1970s, she began to make various appearances on episodic primetime television series such as Kojak, Happy Days, Police Woman, and a few episodes of CBS Radio Mystery Theater Morgan acting career includes appearing on the CBS daytime soap opera Search for Tomorrow as Jennifer Pace from 1973 to 1977. In 1978, she appeared on the primetime soap opera Dallas as the first actress to portray Jenna Wade, before taking a lead role on the NBC series Flamingo Road in 1980 (for which she was nominated for a Golden Globe Award for Best Actress – Television Series Drama). In 1984, she co-starred on ABC's short-lived television drama Paper Dolls and then appeared on Falcon Crest as attorney Jordan Roberts from 1985 to 1986. Morgan has also performed in theater and played guest roles on television comedies, including Murphy Brown (for which she was nominated for a Primetime Emmy Award for Outstanding Guest Actress in a Comedy Series), Roseanne, Cybill, and Friends. She has appeared in these TV Series: Kojak, Switch, Rosetti and Ryan, Happy Days, The Bob Newhart Show, Police Woman, The Amazing Spider-Man, Barnaby Jones, Mork & Mindy, A Man Called Sloane, The Love Boat, Magnum, P.I. , Simon & Simon, North, and South, North and South, Book II (TV Mini-Series), Lois & Clark: The New Adventures of Superman, Mélange, Days of Our Lives and Many More. She appeared in these TV Movies My Perfect Romance, A Christmas in Vermont, Perfect on Paper, American Horror House, Workers' Comp, The Initiation of Sarah and more.

Reply
Although credited with being in the cast of episode 0634 "The Phantom House", Ms Fairchild did not appear in the episode as broadcast. Between the time when Mr Marshall's lines were recorded and the show was recorded, she must not have been available, and Patricia Elliot took the character's part and was not in the credits. Someone being credited or not only happened a few times, and this is one of them.

Reply
Morgan Fairchild has appeared on Broadway and in over 300 films and television programs. She is best remembered for her work in the daytime and nighttime soap operas, Search For Tomorrow, General Hospital, Days of Our Lives, Flamingo Road and Falcon Crest.

Reply
Listened to Every Dog Has His Day to and from work yesterday. Good episode.

Reply
Not sure, but I think Morgan Fairchild's character in "You bet your life" ended up being pregnant with triplets. Reason being, there was a "Twins week" at the old CBS RMT form where episodes featuring twins were featured. I think "You bet your life" was the only RMT episode to mention triplets, so they had that on the following week.

Reply
I wasn't aware she was part of RMT I always thought she was a hottie. She must be one of the youngest stars to appear on RMT....I always thought that John Lithgow was until now. She was awesome in Pool Of Fear. It was Fielden Farrington's usual outstanding work. He did the best wicked stepchildren and ghost stories.

Reply
OMG! I did like her in some things. She was awesome in The Seduction and The Initiation of Sarah. I wanted to break her neck for what she put Kay Lenz through. I liked her when she was on Mystery Theater in Pool of Fear. She was OUTSTANDING when she read the audiobook, Single White Female.