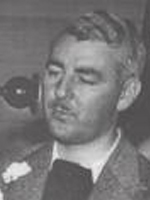 William Johnstone worked in broadcasting for 16 years after leaving the Army. He became a full time writer in 1980.

He appeared in the following 3 episodes of Radio Mystery Theater

William Johnstone was born on February 7, 1908 in Brooklyn, New York City, New York, USA. He was an actor, known for Titanic (1953), Tom Corbett, Space Cadet (1950) and Down Three Dark Streets (1954). He replaced Orson Wells in the Shadow Series, when Orson left the role. Bill Johnstone’s early radio career was dominated by a genre not uncommon to radio artists: soap operas. Johnstone emoted on a good many of them, including Five-Star Jones, Irene Rich Dramas, Joyce Jordan, M.D., Mrs. Wiggs of the Cabbage Patch, Valiant Lady, and Wilderness Road. His exposure on The Shadow led him to become one of the busiest actors in the radio business, working on such anthologies as Arch Oboler’s Plays, The Columbia Workshop, Family Theatre, Favorite Story, The General Electric Theatre, Great Plays, Hallmark Playhouse, The Railroad Hour, Romance, Screen Director’s Playhouse, Stars Over Hollywood, The Theatre Guild on the Air, and The Theatre of Romance. He was practically a regular on The Cavalcade of America and The Lux Radio Theatre, and later continued his association with Orson Welles with appearances on Campbell Playhouse, The Mercury Summer Theatre, and This is My Best. Johnstone appeared many times on “radio’s outstanding theatre of thrills,” Suspense, in the early days of that long-running anthology…and during its sponsorship by Auto-Lite, he would interact with announcer Harlow Wilcox in the role of “Hap the mechanic.” Escape and The Whistler also called upon his talents (Johnstone even briefly played the titular narrator on the latter program).

Reply
William "Bill" Johnstone had a long and prolific career in radio, appearing hundreds of times in dozens of radio programs, but is best remembered for his 5 year long run as Lamont Cranston in The Shadow. He appeared on Broadway and in film and television and is best remembered for his reoccurring role of Judge James T. Lowell on the daytime soap opera, As The World Turns.