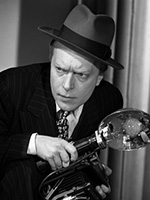 He appeared in the following 9 episodes of Radio Mystery Theater

Reply
Staats Cotsworth (February 17, 1908 – April 9, 1979) was an actor in old-time radio. He is perhaps best known for playing the title role in Casey, Crime Photographer. Cotsworth was once described as "the busiest actor in radio," having performed in 7,500 broadcasts in 12 years. Some of the shows he appeared include Big Sister, Lone Journey, Inspector Thorne, Ma Perkins, Mr. and Mrs. North, Roger Kilgore-Public Defender, The Chase, These Are Our Men, X Minus One, Mr. Keen, Tracer of Lost Persons, The Right to Happiness, Cavalcade of America, Grand Central Station, The Story of Mary Marlin, and Silver Theater. On Television Cotsworth was seen in Killer's Choice, the premiere episode of Kraft Mystery Theatre and in "The Thirty-first of February'", an episode of The Alfred Hitchcock Hour. He was in Macbeth when that play was presented on Hallmark Hall of Fame.

Reply
Prolific radio actor Staats Cotsworth was known as the "Clark Gable of radio" with over 7500 appearances on dozens of radio programs including his 7 year lead role in CBS Radio's Casey, Crime Photographer. He appeared in over 20 Broadway productions, as well as film and television and is best remembered for his roles on the daytime soap operas, The Edge Of Night, As The World Turns and The Doctors.