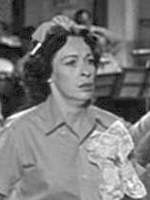 Eileen Heckart had success in Stage, Movie, and TV appearances. She was married to insurance broker John Yankee Jr for 53 years.

Eileen Heckart (born Anna Eileen Herbert, March 29, 1919 – December 31, 2001) was an American actress of film, stage, and television. Primarily known as a character actress, her career spanned nearly 60 years. She first became known for her role as schoolteacher Rosemary Sydney in the original 1953 cast of William Inge's play Picnic on Broadway. She often played mothers, including Rocky Graziano's mother in Somebody Up There Likes Me (1956); the mother of a murdered child in the cult classic The Bad Seed (1956); the elderly mother of an estranged son in the PBS production of the one-act play Save Me a Place at Forest Lawn (1966); the mother of reporter Jack Stein on the 1990s television sitcom Love & War; the mother of two separate characters on the daytime soap opera One Life to Live in the 1980s and 1990s; and the meddling mother of a jilted wife (played by Diane Keaton) in The First Wives Club (1996), her last film role. She also had a recurring role on the popular 1970s sitcom The Mary Tyler Moore Show as Mary's Aunt Flo Meredith, a famous woman reporter, which she repeated on the subsequent spin-off series, Lou Grant. Heckart began her Broadway career as the assistant stage manager and an understudy for The Voice of the Turtle in 1943. Her many credits include Picnic, The Bad Seed, A View from the Bridge, A Memory of Two Mondays, The Dark at the Top of the Stairs, A Family Affair, And Things That Go Bump in the Night, Barefoot in the Park, Butterflies Are Free, You Know I Can't Hear You When the Water's Running, and The Cemetery Club. On television, Heckart had starring roles in The Five Mrs. Buchanans, Out of the Blue, Partners in Crime, and Backstairs at the White House (Emmy nomination as Eleanor Roosevelt). In 1994, she won an Emmy Award for Outstanding Guest Actress in a Comedy Series for her appearance as Rose Stein on Love & War. Her other guest spots included The Fugitive (where she appeared in three episodes as a nun, "Sister Veronica"), The Mary Tyler Moore Show (two Emmy nominations as journalist Flo Meredith, a role she carried over to a guest appearance on MTM's spinoff Lou Grant), Love Story, Rhoda, Alice, Murder One, Hawaii Five-O, Gunsmoke, Cybill, The Cosby Show (one Emmy nomination as Mrs. Hickson), and many others. Heckart played two unrelated characters on the daytime soap opera One Life to Live. During the 1980s, she played Ruth Perkins, the mother of Allison Perkins, who had kidnapped the newborn baby of heroine Vicky Lord Buchanan under orders from phony evangelist and mastermind criminal Mitch Laurence. During the early 1990s, she played the role of Wilma Bern, mother of upstate Pennsylvania mob boss Carlo Hesser and his meek twin, Mortimer Bern. She appeared in the 1954 NBC legal drama Justice, based on case files of New York's Legal Aid Society

Reply
Heckart won the Academy Award for Best Supporting Actress for her work in the 1972 movie adaptation of Butterflies Are Free and was nominated in 1956 for her performance as the bereaved, besotted Mrs. Daigle in The Bad Seed (1956), both of which were roles Heckart had originated on Broadway.

Reply
Eileen Heckart appeared in radio on such programs as The Big Story, Cloak and Dagger and Theater 5. She worked extensively on Broadway winning 1 Tony award. She had appearances in over 120 films and television programs including the films, Butterflies Are Free, for which she won an Oscar and The Bad Seed, for which she won a Golden Globe.

Reply
She was great as the drunk Mrs. Daigle in The Bad Seed. I believe she played Alice Hyatt's mother-in-law "Rose Hyatt" on the sitcom Alice.

Reply
She had a recurring role as Mary Richards’ aunt, Flo Meredith, a newspaper political reporter, on The Mary Tyler Moore Show and on Lou Grant. On the MTM show, she was Lou’s love interest for a while. She was too independent to be “tied down”, and turned down his marriage proposal.