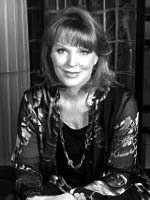 Mariette Hartley was raised in accordance to theories espoused by her psychologist grandfather that children should not be held of cuddled. She credits the lack of warmth in her home as driving her to the theater.

Mary Loretta "Mariette" Hartley (born June 21, 1940) is an American character actress. Hartley began her career as an eight-year-old in the White Barn Theater in Westport, Connecticut. In her teens as a stage actress, she was coached and mentored by Eva Le Gallienne. Her film career began with Ride the High Country (1962)/ In 1962, she appeared in an episode of CBS's Gunsmoke as a mountain girl. In 1963, she starred in the leading role in Drums of Africa, directed by James B. Clark. She was cast in an episode of the Jack Lord adventure/drama series about the rodeo circuit, Stoney Burke. Hartley had a supporting role as Susan Clabon in Alfred Hitchcock's Marnie in 1964 n the 1963–1964 television season, she appeared in an episode of ABC’s drama about college life, Channing and in two episodes of NBC's The Virginian. In 1963, she was cast as the character Hagar in "The Day of the Misfits" of the ABC Western series, The Travels of Jaimie McPheeters, starring child actor Kurt Russell in the title role. She worked with Rod Serling and Gene Roddenberry, two creators of television science fiction. In 1963, she appeared in an episode of The Twilight Zone ("The Long Morrow"). She played the character Ellie in episode 118 (1964) of Gunsmoke. She appeared in two episodes of the NBC series Daniel Boone, "Valley of the Sun" in 1968 and as a nun in "An Angel Cried" in 1970. In 1969, she appeared in the penultimate episode of NBC's Star Trek, "All Our Yesterdays,"[8] as Zarabeth. She appeared in several science fiction films, Marooned (1969), Earth II (1971), and the pilot for the postapocalyptic Genesis II (1973), another Roddenberry production. Other Television appearances include ABC's Peyton Place, The Bob Newhart Show, Disney's The Mystery in Dracula's Castle, Paul Sand in Friends and Lovers, Emergency!. McCloud, Little House on the Prairie, the television series Logan’s Run, The Incredible Hulk, The Rockford Files, M*A*S*H, Goodnight, Beantown. and many others. Her later film roles included two Lee Van Cleef Westerns, Barquero (1970) and The Magnificent Seven Ride (1972). She also appeared in The Return of Count Yorga (1971), Skyjacked (1972), Improper Channels (1981), O'Hara's Wife (1982) opposite Ed Asner, 1969 (1988), Encino Man (1992), and Novel Romance (2006). She is also known for her Polaroid camera commercials with James Garner

Reply
Mariette Hartley's acting career has spanned over 6 decades and she continues to work. She has appeared on Broadway and in over 200 films and television programs. She has had 7 Emmy nominations with one win for her work on the Incredible Hulk. Her film credits include Ride The High Country, Marnie, Marooned, The Return Of Count Yorga, The Magnificant Seven Ride and Encino Man. Her TV credits include The Twilight Zone, Peyton Place, Star Trek, Little House On The Prairie, M*A*S*H, Goodnight, Beantown, Law And Order: SVU and the daytime soap opera, One Life To Live, among many others. She is also remembered for a series of popular commercials that she did with actor James Garner for Polaroid.