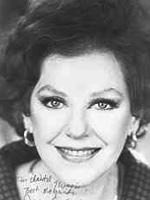 Joan Copelan is the younger sister of playwright Arthur Miller. She worked several Shakespearean plays early in her career and appeared in several soap operas

She appeared in the following 4 episodes of Radio Mystery Theater

Joan Maxine Copeland (née Miller; born June 1, 1922) is an American actress. She is the younger sister of playwright Arthur Miller. She began her career during the mid-1940s, appearing in theatre in New York City, where, shortly thereafter, she would become one of the very first members admitted to the newly formed Actors Studio She is best known for her performances in the 1977 Broadway revival of Pal Joey and her award winning performance in the 1981 play The American Clock. She has also played a number of prominent roles on various soap operas throughout her career, including Andrea Whiting on Search for Tomorrow and Gwendolyn Lord Abbott on One Life to Live. Joan began her career in the theatre, making her professional debut as Juliet in William Shakespeare's Romeo and Juliet at the Brooklyn Academy of Music in 1945 Copeland began working on television in the early 1950s as a guest actress on such shows as Suspense and The Web and the live telecast of O'Neill's play The Iceman Cometh in 1960. She has appeared on numerous soap operas. She portrayed Andrea Whiting (Joanne's daughter, Patti's malevolent former mother in-law) on Search for Tomorrow, twin sisters Maggie and Kay Logan on Love of Life, and roles on The Edge of Night, How to Survive a Marriage and As the World Turns. She also portrayed Gwendolyn Lord Abbott on One Life to Live from 1978–1979, and later returned to the series to play Selma Hanen in 1995. Between 1993-1997 she portrayed the recurring character of Judge Rebecca Stein on Law & Order. Her other television credits include guest appearances on The Patty Duke Show, Chicago Hope, ER, All in the Family, and Naked City to name just a few. Copeland made her first film appearance as Alice Marie in The Goddess (1958). Her film career has been sporadic and her appearances have been almost exclusively in prominent secondary roles. Her film credits include Middle of the Night (1959), Roseland (1977), It's My Turn (1980), A Little Sex (1982), Happy New Year (1987), The Laser Man (1988), Her Alibi (1989), Jungle 2 Jungle (1997), The Peacemaker (1997), The Object of My Affection (1998), The Adventures of Sebastian Cole (1998), The Audrey Hepburn Story (2000), The Last Request (2006), and The Private Lives of Pippa Lee (2009). She also voiced Tanana in Disney's Brother Bear (2003).