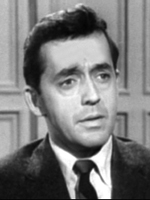 He played a marvelous and creepy villain in the original Mission: Impossible TV series. The evil just drips off him in the one episode he was in. But generally I remember him in other shows to play more sympathetic characters.

Reply
I loved him as the scientist turned werewolf in Voyage to the Bottom of the Sea!

Reply
His voice is strangely familiar as the Twilight Zone announcer.

Reply
Yes, he was the off-screen announcer/narrator on for the 1980s revival of the Twilight Zone. He also played the theoretical physicist who lived next door in one of my favorite original Twilight Zone episodes, "Little Girl Lost" and played Jeremy Pike in several episodes of The Wild, Wild, West, filling in for an ailing Ross Martin as Jim West's sidekick.

Reply
Charles Leonard Aidman (January 21, 1925 – November 7, 1993) was an American actor of stage, film, and television. Charles Aidman originally planned a career as an attorney but was sidetracked during World War II and naval officer training at DePaul University. Among his many television credits, Charles guest-starred on NBC's The Virginian in the episode "The Devil's Children" and twice on the NBC western series The Californians. He also appeared twice on David Janssen's Richard Diamond, Private Detective. He portrayed a bounty hunter on the ABC's western series Black Saddle. He was cast in CBS's fantasy drama, Twilight Zone in the episodes "And When the Sky Was Opened" and "Little Girl Lost." About this time, he guest-starred on five other western series: the ABC/Warner Brothers series Colt .45; ABC's The Rebel, starring Nick Adams; NBC's Riverboat, as Frank Paxton in the episode "The Fight at New Canal," with Darren McGavin as Captain Grey Holden; and The Americans, the story of family conflicts in the American Civil War starring Darryl Hickman and the successor series to Riverboat; CBS's Trackdown, as Len Starbuck in "The Samaritan"; and CBS's Johnny Ringo, as Jeffrey Blake in "The Stranger". He appeared on another NBC western series starring Barry Sullivan, The Road West, in its 1966 episode "The Lean Years." That same year Aidman played a scientist who turned into a werewolf in an episode of Voyage to the Bottom of the Sea. He then guest-starred on CBS's The Wild Wild West in a recurring role for several episodes during the series' fourth season as Jeremy Pike, one of Jim West's substitute sidekicks. Ross Martin, who portrayed West's regular sidekick Artemus Gordon in the series, was recovering from an illness Aidman played the father of Elmer Dobkins in an episode of Little House On The Prairie and appeared in an episode of the 1974 police drama Nakia. Three years later, he portrayed a memorable character in an episode of M*A*S*H, "The Grim Reaper," playing Colonel Bloodworth, a callous, sadistic commander who takes pleasure in predicting casualties and reducing his troops to statistics. Later, from 1985-1987, Aidman served as the original narrator for the revival of The Twilight Zone series until he was replaced by Robin Ward. His list of credits and appearances is quite long. Movies that he appeared in include: Pork Chop Hill ,War Hunt, Angel, Angel, Down We Go , Innerspace, Alien Zone and others.

Reply
Charles Aidman was a prolific character actor with a 40 year acting career. He appeared on Broadway and had appearances in over 180 films and television programs, including the Twilight Zone, Boris Karloff's Thriller and as the narrator of the 80s revamped Twilight Zone series.