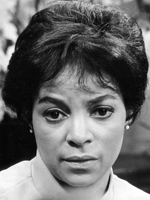 Ruby Dee has many acting and writing credits. She is best known for her role in 1961's A Raisin in the Sun.

She appeared in the following 4 episodes of Radio Mystery Theater

Here Goes The Bride was the best one she did! She sounded so sophisticated, rich, elegant, and regal. She did a great job.

Reply
Actress Ruby Dee recently died at age 89 of "natural causes" according to her daughter. From 1974 to 1975, she appeared in four episodes of CBSRMT. The episodes range from Southern gothic romance to supernatural adventure. Hats off to a major talent.

Reply
Ruby Dee (October 27, 1922 – June 11, 2014) was an American actress, poet, playwright, screenwriter, journalist and civil rights activist. She is perhaps best known for originating the role of "Ruth Younger" in the stage and film versions of A Raisin in the Sun (1961). Her other notable film roles include The Jackie Robinson Story (1950), and Do the Right Thing (1989). Ruby appeared in 20 episodes of Peyton Place She appeared as Cora Sanders in the Season 1/Episode 14 of Police Woman She appeared in one episode of The Golden Girls' sixth season. She played Queen Haley in Roots: The Next Generations, a 1979 miniseries For her performance as Mahalee Lucas in American Gangster (2007), she was nominated for the Academy Award for Best Supporting Actress and won the Screen Actors Guild Award for Female Actor in a Supporting Role. She was a Grammy, Emmy, Obie and Drama Desk winner. She was also a National Medal of Arts, Kennedy Center Honors and Screen Actors Guild Life Achievement Award recipient. She was married to Ossie Davis, with whom she frequently performed, until his death in 2005. Her first onscreen role was in That Man of Mine in 1946. She received national recognition for her role in the 1950 film The Jackie Robinson Story.[8] In 1965, Dee performed in lead roles at the American Shakespeare Festival as Kate in The Taming of the Shrew and Cordelia in King Lear, becoming the first black actress to portray a lead role in the festival. Her career in acting crossed all major forms of media over a span of eight decades, including the films A Raisin in the Sun, in which she recreated her stage role as a suffering housewife in the projects, and Edge of the City. She played both roles opposite Poitier

Reply
Multi-talented writer/producer/actress Ruby Dee appeared in radio in the 40s and 50s in a number of old time radio programs. She had roles in 8 different Broadway productions and appeared in over 200 films and TV shows. She is best known for her role in 1961's A Raisin in the Sun. She was nominated for one Oscar, nine Emmys (for which she won one) and two Grammys (for which she won one).