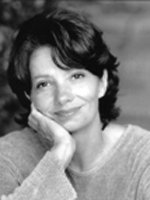 Mary-Joan Negro was nominated for a Tony in 1979's Wings, which she reprised for TV. She has had many TV guest star roles.

Mary-Joan Negro was born on January 9, 1951, in Yonkers, New York, USA. Mary Joan Negro is the head of undergraduate acting and an associate professor of theatre practice at the USC School of Dramatic Arts. She is an acclaimed actress who has acted on Broadway, off-Broadway, at repertory companies throughout the United States. Negro received a Tony nomination for her performance in Arthur Kopit’s play, Wings. She is a founding member of John Houseman’s The Acting Company, she performed with that company both on Broadway, as well as on tour throughout the U.S. She has guest starred in countless television movies, mini-series, episodic, soaps, and sitcoms. She is an actress, known for The Equalizer (1985), Cold Case (2003) and Employee of the Month (2004) She also appeared in some of these TV series Kojak(1976), Another World, Remington Steele, One Life to Live, Spenser: For Hire, L.A. Law, Empty Nest, Brooklyn Bridge, Commander in Chief, Six Feet Under, Judging Amy, Cold Case and more.