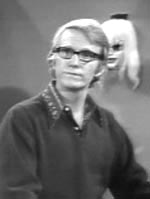 Skip Hinnant debuted on The Patty Duke Show. He appeared as Schroeder in the original off Broadway production of Your a Good Man Charlie Brown.

Joseph Howard "Skip" Hinnant (born September 12, 1940) is an American actor and comedian Hinnant's first major role was as Cathy's boyfriend, Ted, on The Patty Duke Show from 1963 to 1965. In 1967, he played Schroeder in the original off-Broadway cast of Clark Gesner's You're a Good Man, Charlie Brown, where his older brother, Bill Hinnant, played Snoopy. Skip Hinnant is best known as a featured performer on the children's show The Electric Company, which aired on the American educational television network PBS from 1971 to 1977. He was best known at that time as word decoder Fargo North and as "The Boy" in the soap opera satire "Love of Chair." He was also the voice of Robert Crumb's underground comic character Fritz the Cat in both the animated film of the same name written and directed by Ralph Bakshi in 1972 and its sequel written and directed by Robert Taylor, The Nine Lives of Fritz the Cat in 1974. In 1977, he voiced the Easter Bunny in the Rankin/Bass made-for-television, stop-motion animated feature The Easter Bunny Is Comin' To Town, and in 1980, he provided the voice for the title character Pogo Possum in the direct-to-video feature film I Go Pogo (also done in stop-motion). His most recent acting roles were an appearance in the PBS science education show 3-2-1 Contact as Flash Jordan in episode Measurement: How Fast? How Slow? in November 2, 1984 and a part in an episode of Kate & Allie as Bob Barsky's boss Brian Keyes in episode "I've Got a Secret" in February 27, 1989. Then he retired from television acting and devoted his entire career to voice-over work at beginnings of 1990s, but in 2006 he made appearances in two retrospectives of The Electric Company: one was a PBS pledge drive special, the other was The Best of the Electric Company: Vol. 2