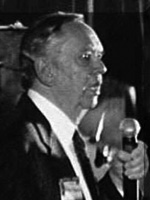 Arthur Anderson has a long history in Radio including a role on 1935's Let's Pretend and was part of Orson Welles Mercury Theater troupe.

Arthur John Miles Anderson (August 29, 1922 – April 9, 2016) was an American actor of radio, film, television, and stage. He first came to radio through a children's community playhouse and started appearing regularly in 1934 on Uncle Nick Kenny's Radio Kindergarten at WMCA. As a child, he was heard on NBC in the role of the orphan Buddy on the radio network's musical serial drama, Tony and Gus (1935). The following year he joined the cast of Nila Mack's Let's Pretend and continued on that children's program until it came to an end in 1954. In 2004, he wrote a history of the show, Let's Pretend and the Golden Age of Radio (BearManor Media), which includes a foreword by Norman Corwin and a complete broadcast log by Derek Tague and Martin Grams, Jr. Anderson appeared in Orson Welles's Mercury Theatre production of Caesar on Broadway, as portrayed as the character Richard Samuels in the 2008 film Me and Orson Welles. Anderson acted in Welles's The Mercury Theatre on the Air, his CBS Radio series as characters in "Treasure Island", "Julius Caesar" and "Sherlock Holmes". Additional radio credits include the juvenile quiz show, March of Games (1938–1941), produced by Nila Mack and featuring many of the young actors from Let's Pretend. Anderson succeeded Lionel G. Wilson as the voice of Eustace Bagge in Courage the Cowardly Dog. His film credits include Midnight Cowboy, Zelig, Green Card and I'm Not Rappaport, and his onscreen television appearances include episodes of Car 54, Where Are You?, Route 66, and Law & Order. Beginning in 1963 he was the voice of the General Mills Lucky Charms mascot Lucky the Leprechaun, continuing the character for 29 years even though he is not Irish

Reply
Arthur Anderson's career spanned an incredible 8 decades, beginning as a child on radio. He appeared on numerous radio programs including Tony And Gus, Let's Pretend, Campbell Playhouse, Columbia Workshop, Aunt Jenny's True Life Stories, Theater Five, Suspense and Orson Welles' Mercury Theater. He appeared in a number of on and off Broadway productions, including appearing with Orson Welles in the Broadway production of Julius Caesar, appearances at the Metropolitan Opera and the stage production of 1776. His film credits include The Magnificant Yankee, The Wild Women Of Wongo, The Group, Midnight Cowboy, Death Dream, Zelig, Daddy's Boys, Green Card, and I'm Not Rapaport. His television credits include The Defenders, Car 54, Where Are You?, Route 66, Dark Shadows, Law And Order, and the daytime soap opera, As The World Turns. His voice acting work includes Marco Polo Jr, Gnomes, Courage the Cowardly Dog and his 29 year role of Lucky the Leprechaun in the Lucky Charms commercials. "They're Magically Delicious!" He was also the voice of "Ducky Drake," the cartoon duck mascot for the northeast-U.S. snack cake brand Drake's Cakes (makers of Ring Dings, Devil Dogs, Yodels, Yankee Doodle Cupcakes, and several others). He authored two published books: "Let's Pretend" and "An Actor's Odyssey".