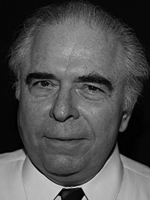 He appeared in the following 4 episodes of Radio Mystery Theater

Reply
Jordan Chaney is my favorite.

Reply
Jordan Charney (born April 1, 1937 in Brooklyn, New York) is an American character actor. Many of his earliest roles were on daytime television, with appearances in numerous soaps. Jordan created the role of creepy Julian Dark in the early to mid-1960s on the CBS soap, The Secret Storm. He played Sam Lucas, a former convict who became a lawyer, in both Another World and its spin-off Somerset, playing the role from 1967 to 1974. He also appeared as Lt. Vince Wolek on One Life to Live (1975–1977). Other roles were on Love of Life and All My Children. Charney portrayed newspaper editor Ted Bergman in the 1977 CBS series The Andros Targets. He had a recurring role as Frank Angelino, Jack Tripper's boss, on Three's Company (1981–1983). He is often cast as a judge, attorney, prison warden, or police officer. He has made appearances on Falcon Crest, Dynasty, Night Court and 100 Centre Street, among many other series. He can also be seen in the recurring role of Judge Donald Karan on Law & Order. Charney has also appeared in such films as The Hospital, Ghostbusters, and Network.

Reply
Jordan Charney has appeared in a number of Broadway productions and in over 80 films and television programs. He is truly the king of soap operas, having appeared on Love of Life, Somerset, Guiding Light, Another World, One Life to Live, General Hospital, Santa Barbara, All My Children, Knots Landing, Dallas and Dynasty.

Reply
Loved her in Ghost Busters!